Slink is a mission in Driver: Parallel Lines.

After TK intercepts one of the bookings for Slink's pornography shoots, as well as a money exchange, he meets Slink in the set of the studio in the Funky Rabbit. Slink realizes that TK was the one who "messed with his shit" once TK enters the room, as he had managed to destroy his pornography stores. Slink, shocked by his return, claims that it has been a while, and wonders if he's still a wheelman. Holding his gun close to his chest, TK moves towards Slink, who asks if TK still remembers the cocaine deal from years ago, which he denies. However, Roost, one of Slink's gunmen who was supposed to have the transaction with Slink, comes into the room, pointing a pistol at TK. After TK informs Roost to leave, Slink orders him to shoot him dead. However, Roost is shot dead quickly by TK, as his gun had actually been out of ammunition. TK gives chase to Slink, who flees the studio. Slink, once outside, tells his bodyguards the "crazy motherfucker [TK] is back", before he manages to escape through Harlem in his magenta Pimp Wagon, with TK chasing after him in a lime green Pimp Wagon. How Slink dies in the mission is the player's choice. Once Slink is killed, the mission is complete.

Later, during the night, TK goes to Ray's Autos in Hunts Point, where he encounters Corrigan, who is sitting on the couch, with Ray giving Corrigan a bottle of beer. Corrigan thanks TK for killing off the crew, which prevented them from giving evidence of the murder of Rafael Martinez. TK is angered by Corrigan, who tells him that he was the only one who thought it was a kidnap. Corrigan in response tells TK that Ray, who has sold out to Corrigan, that he would be better off without Ray, who he sees as broke and a mere gambler. Seeing Ray as a liability, Corrigan shoots Ray, killing him before he can get back up. Corrigan then points a gun at TK, saying he should have killed him in 1978. However, an unknown assailant attempts to shoot Corrigan from behind a door. Corrigan escapes Ray's Autos, with TK taking cover behind the opened door.

Kill Slink [Back to top]
The objective is simple; chase the magenta Pimp Wagon and destroy it, either by the means of repeatedly ramming it off the road, firing weapons, or outright exploding it with a rocket launcher. The gang members inside the car will shoot the player.

Slink and a model.

TK's silhouette at the doorway.

Roost arrives from the back room, and pulls a gun.

TK chases Slink out of the building.
Add a photo to this gallery

Slink gets in the car.

Slink marked on the map.

Job Done.
Add a photo to this gallery

Slink's corpse, along with his gang members, in the destroyed car.
Add a photo to this gallery 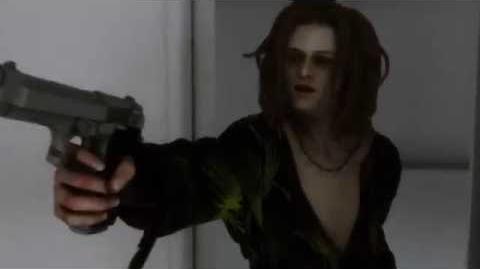 Scene13-DPL-PreSlink(Video)
Cutscene.
Add a photo to this gallery

Retrieved from "https://dpl.fandom.com/wiki/Slink_(mission)?oldid=17455"
Community content is available under CC-BY-SA unless otherwise noted.