The stadium first appears in the 1978 era where it is located within the Flushing Meadows–Corona Park. It is seen as a large blue stadium with the multi-story walkways marked on the outside of the building. The player cannot see the interior of the stadium, however from distant height, the player will notice a basic grass interior with un-textured interiors on the insert of the loop.

The stadium in the 1978 era appears as a conventional circular structure with elevated sections seen on the exterior textures. Multicolored panels are fitted on the side, and a white base color is found.

In the 2006 era, the building is renovated. The logo found on the real-life counterpart, of a man swinging in baseball, can be seen outlined on the blue walls. Large stadium lights can be seen around the stadium walls and red seating can be seen from the stadium wall gap on the southern side of the building. The overall color is now blue and the multicolored panels are removed, much like the real life Shea Stadium; the color and multicolored panels were removed in 1981, following a revamp, with the new logo being an addition to the structure.

Within the stadium is a much larger spanning car park, which access points from the Flushing Meadows–Corona Park entrance points, as well as roads leading towards northern Queens. Little to no people can be found around the area, although many cars can be found in the surrounding car parks. Its situation within the park seems to be based closely to the location of the Arthur Ashe Stadium in Flushing, Queens. The stadium cannot be accessed and plays no role in the storyline. 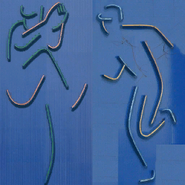 Neon lights found on the building in the 2006 era.
Add a photo to this gallery

Retrieved from "https://dpl.fandom.com/wiki/Shea_Stadium?oldid=15506"
Community content is available under CC-BY-SA unless otherwise noted.