• Arrive in a customized car or bike.

• Get Rosalita to the finish line.

Hey, kid! You're gonna represent me in a little underground street race some guys I know run every year. My beautiful Rosalita, my car, is my stake. I don't worry though, 'cause - ha! - you will go and win her back for me. We meet at the World Fair Park - the start line. Just don’t turn up in a heap of junk – you gotta win, man!

Rosalita Racer is a mission in Driver: Parallel Lines.

The Mexican has set up a race with "some guys I know run every year", where his "Rosalita is at stake". He wants TK to turn up to the race in something that's "gotta win man", and expects the TK to win his car back for him. He states they meet up in the World Fair Park at the start line, and have to race to the Rosalita which is located in a car park besides some apartments in Brookyln.

After TK turns up to the start line in the World Fair Bark near a band stand, he finds the Mexican with his bodyguards, waiting at the start line, beside a Cerrano. The race starts, and the competitors are found in an Andec Punk, Cerrano Punk and Brooklyn Punk. They race through the streets of Queens and Brooklyn in whatever route they choose.

Get to Rosalita. [Back to top]

All the opponents will begin racing, with some taking different routes to each other; there is no route to follow, the player must simply reach the car before the other racers. No weapons must be used.

Get Rosalita to the finish line. [Back to top]

Once the player reaches the "finish line", The Mexican will be waiting, and thanks him for at least getting his car back. There is no reward for the mission.

The Mexican waiting at the starting line, beside a Cerrano.

The Rosalita on the map.

Arriving at the Rosalita.

The Rosalita (The Mexican's Ride).

Get Rosalita to the finish line.

The enemies tailing the car.

The finish line on the map.

The Mexican talking to TK. 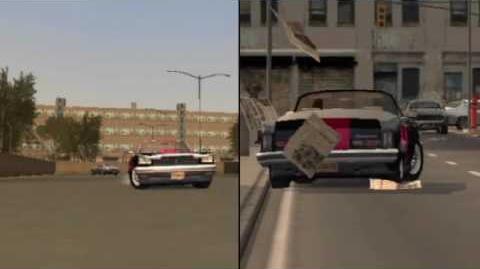 RosalitaRacer-DPL-Lowdown(Video)
Lowdown.
Add a photo to this gallery

Retrieved from "https://dpl.fandom.com/wiki/Rosalita_Racer?oldid=16344"
Community content is available under CC-BY-SA unless otherwise noted.