It's me. We're gonna need a prison transport to help break Candy out. Wait near the entrance to Riker's and take one that leaves. Do what you need to, but don't wreck it. Once secured, get the transporter back to a garage so it can be fixed up. Expect resistance.

• You need a vehicle.

• Jail Break (If Turning The Screw is also completed)

Paddy Wagon is a mission in Driver: Parallel Lines.

Bishop contacts TK informing him they needs to acquire a prison transport vehicle to break Candy free from the prison. He tells him a prisoner is due to be extracted from the prison, giving him the opportunity to hijack the convoy and steal the truck.

The prison van is leaving the prison with two escort vehicles when TK is told to chase the truck. Under a heavy amount of fire power, TK reaches the truck after taking out the escorts and security members. He then enters the truck, to which it is taken back to Ray's Autos on a Wrecker to be fixed up. The unnamed prisoner escapes free after the hijack.

You need a vehicle. [Back to top]

Stop the prison transport. [Back to top]

The player needs to tail the prison van, and the best method to near the prison van is to take out the tailing escort police cars, using a fast firing weapon available, such as the Service 9 or Revolver; the Shotgun is too inaccurate to take out the drivers unless they are near to the car. Once the tailing escort has been taken out, it is recommended to keep a fair distance from the prison van, but constantly use the Revolver and shoot at the truck - nearing the truck is a risk, as the player is vulnerable to the shots being fired from the rear of the truck. Two security guards - one New York Police Department member and one New York State Penitentiary security member - are found in the rear of the truck. They will fire at the player using the LI-15 and Revolver. They will constantly fire at the player and shots from the player do not kill the two security guards inside the truck. Also inside the rear of the truck is an unnamed prisoner, who later escapes free.

To stop the prison van, the player needs to damage the truck enough (down to 25% of the truck's health, which is indicated by a health-bar at the top left of the screen upon startup of the mission) for it to come to a halt.

Take the prison transport. [Back to top]

You need a vehicle. (appears when arriving on foot)

The Prison Van and the first escort Zartex leaving the prison.

The Prison Van on the map.

Firing at the escort units.

Firing at the Prison Van.

In the Prison Van.

The Prison Van hooked up to a tow truck, where the prisoner, in confusion, is questioning T.K as to where he is.

Job done. You got the prison transport.
Add a photo to this gallery 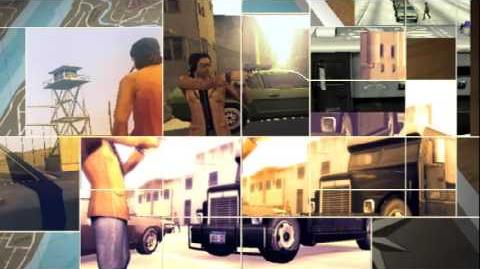 PaddyWagon-DPL-Lowdown(Video)
Lowdown.
Add a photo to this gallery

Retrieved from "https://dpl.fandom.com/wiki/Paddy_Wagon?oldid=17498"
Community content is available under CC-BY-SA unless otherwise noted.