• Bridge not reached in time.

• Billboard not exploded in time.

• Escort car not exploded in time.

• L-Train bridge not exploded in time.

• Gas tank not exploded in time.

• Failed to get the limo out of the kill zone before police arrive.

• Blow up the Billboard.

• Blow up the escort car.

• Blow up the L-train Bridge.

• Get the limo to Hunts Point.

• Press 'Q' to blow the billboard.

• You diverted the convoy. Now blow the escort car.

• You took out the escort car. Now get to the bridge.

• Get to the bomb trigger point.

• You took out the escort. Now get to the gas tanks.

• Get to the bomb trigger point.

• You diverted them. Get to the kill zone.

• Wait for the convoy.

• Get the limo out of there before the cops show up.

• Get the limo back to Hunts Point.

Kidnap is a mission in Driver: Parallel Lines.

After successfully planning the entire convoy in prior events, Candy and Corrigan lead the big job, which is to gain advantage of the Colombians' gang lord Rafael Martinez. This is done to discourage the Colombians to continue their drug’s trade as well as receiving a substantial amount of cash from them - the ransom money, in exchange for Martinez. The plan is to execute numerous explosions across the city, which will divert the convoy of Rafael and his bodyguards, eventually causing him to be almost completely vulnerable and easy to reach in order to approach and kidnap him.

After being given the go-ahead, TK is commanded to do the job. Candy is by his side via radio where they can communicate with each other, as well as listen in to the Colombians' discussions. TK heads to the off-ramp of the Williamsburg Bridge, where a large billboard is found hanging on a building's side face. The convoy heads towards the bridge where they plan to cross, but, following the plan, TK triggers an explosion, causing the billboard to fall onto the bridge, blocking the way. In a panic, the convoy along with Rafael's limo divert, heading south in Manhattan. Pursuing the now-diverted convoy, TK triggers the explosive fitted to the rear escort car, exploding the vehicle, leaving the tail of the convoy with one less bodyguard. The convoy continue to speed ahead. TK heads across the Queensboro Bridge to reach the L-train bridge which they plan to destroy. Once reached, TK fits the bombs to the bridge, and waits for the convoy to near it, before triggering the explosion. The third escort car is now destroyed, leaving the convoy more vulnerable. TK follows the final part of the plan; to explode the gas tanks in Queens, next to World Fair Park. The fleeing convoy is heading towards the gas station, when TK sets and triggers the explosion, causing the gas tanks to explode, and a gas tanker truck leaving to explode, completely blocking the road. The convoy makes its final diversion, whilst TK heads towards the "kill zone", the part of the plan initialized to surround and trap the now completely vulnerable limo containing Rafael. When reached, TK finds two large gas tanker trucks ready to close-in on the fleeing limo. The limo follows exactly how they expected, trapping itself, before the bodyguards within the car exit and begin to shoot TK. TK eliminates the bodyguards, and jacks the limo with Rafael inside. He gets out of the kill zone via a small passageway and flees the area before cops arrive. TK now has the limo, and heads back to Hunts Point with their kidnap scared in the rear of the car.

Once arrived at the warehouse in Hunts Point, the rest of the crew turn up; The Mexican, Candy, Slink and Bishop. They are happy with TK's work. Corrigan then arrives in his car. Stepping out, he "thanks" TK for his work as well, and TK feels the plan is coming along - so does Corrigan. Rafael, tied to a pillar by TK, is thrown into the trunk of the car occupied by The Mexican, Candy, Slink and Bishop. The crew leave, while TK is left around.

Block the bridge eastbound. [Back to top]

Wait for Candy's command. [Back to top]

Press 'Q' to blow the billboard. [Back to top]

You diverted the convoy. Now blow the escort car. [Back to top]

Press 'Q' to destroy the escort car. [Back to top]

You took out the escort car. Now get to the bridge. [Back to top]

Get to the bomb trigger point. [Back to top]

Wait for Candy's command. [Back to top]

You took out the escort. Now get to the gas tanks. [Back to top]

At the gas station is a large tanker truck and two large gas tanks, these are the two main props used to divert the convoy once again.

Get to the bomb trigger point. [Back to top]

You diverted them. Get to the kill zone. [Back to top]

Wait for the convoy. [Back to top]

Get the limo out of there before the cops show up. [Back to top]

After the bodyguards are killed, the player must take the limousine and get out of the area before the police arrive. The only way to leave the area is via the backstreets of which the player entered the area in.

Get the limo back to Hunts Point. [Back to top]

Pre-mission, the player will unlock the Grenade Launcher, which will become available at the Safe House.

The location of the Williamsburg Bridge on the map.

The convoy indicated on the map.

Arriving at the bridge.

Press 'Q' to blow the billboard.

You diverted the convoy. Now destroy the escort car.

You took out the escort car. Now get to the bridge.

The location of the L-Train bridge on the map.

Arriving at the L-Train bridge.

Get to the bomb trigger point.

Press 'Q' to blow the bridge.

You took out the escort. Now get to the gas tanks.

The location of the gas tanks on the map.

Arriving at the gas tanks.

Get to the bomb trigger point.

Fire burning around the gas tanks.

You diverted them. Get to the kill zone.

The location of the kill zone on the map.

Arriving at the kill zone.

Wait for the convoy.

Get the limo out of there before the cops show up.

Fighting off the guards.

Get the limo back to Hunts Point.

Location of the warehouse on the map.

Slink, The Mexican and Candy arrive.

The Mexican stepping out of the car.

Rafael Martinez tied up against the pole.

Corrigan getting out of his car.

TK pleased with himself.

The team leaving. Note the team putting Rafael in the boot of the car.
Add a photo to this gallery

Grenade Launcher available at the Safe House.
Add a photo to this gallery 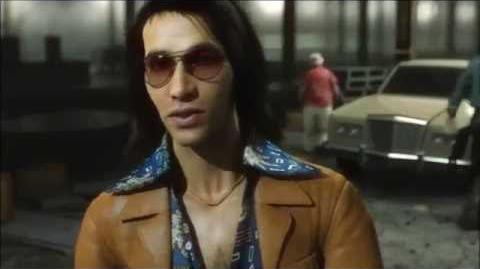 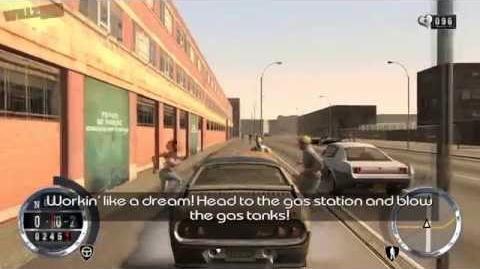 Retrieved from "https://dpl.fandom.com/wiki/Kidnap?oldid=16959"
Community content is available under CC-BY-SA unless otherwise noted.