• Missed too many shots.

• Tail the car and shoot it until it stops.

Gunman is a mission in Driver: Parallel Lines. It is the third mission in the game.

Slink wants TK to meet him at a power station at Long Island, where he will train TK to use basic weapons. The player must complete a series of objectives that teach the player multiple techniques, these contain:

Lock On - shooting at targets using the 'lock-on' feature, the player must shoot the designated barrels to unlock the next task.

Marksmanship - the player must now shoot out the tires of a car, if shot too much, the car will explode, failing the mission

Driving and Shooting - shooting a target car whilst giving chase to it using another car. If the car is rammed by the player, the damage made will not be counted, only shots from the weapon are counted. The player must destroy the ride.

Immediately after the mission, TK is informed by Ray that he needs money - $1,500. The objectives for the next mission appear, but the mission has no time limit, and the player can safely leave the game after the instructions appear on-screen without losing progress.

[Practise] Strafing. [Back to top]

[Practise] Marksmanship. [Back to top]

Waste the hot car. [Back to top]

[Practise] Driving and Shooting. [Back to top]

Tail the car and shoot it until it stops. [Back to top]

Slink talking to T.K about lock-on.

Slink talking to T.K about strafing.

Slink talking to T.K about marksmanship.

Slink talking to T.K about driving and shooting.

Tail the car and shoot it until it stops.

Use your gun, but don't ram him. 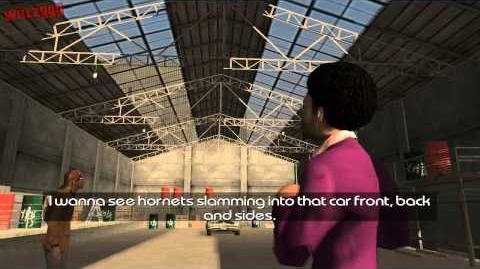 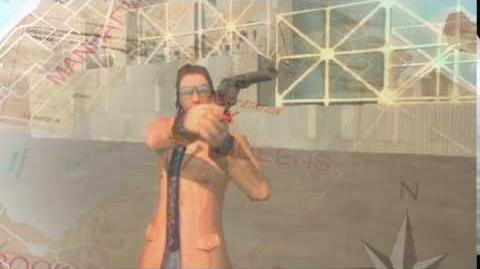 Gunman-DPL-Lowdown(Video)
Lowdown.
Add a photo to this gallery

Retrieved from "https://dpl.fandom.com/wiki/Gunman?oldid=16780"
Community content is available under CC-BY-SA unless otherwise noted.