I want you to go to the airport. The Colombians got one of their escort cars parked up in a secure lot - the front's gonna be real secure - that's where the guys with shooters are gonna be strutting up and down. You're going to get in there somehow, take the car and drive it over to Phoenix Autos, where one of Bishop's buddies is gonna fit a little extra: little extra TNT. Ha! Then you drive it back to the airport, pronto. Without a scratch, huh? If any of those goons suspect the plant, it's a waste of time.

Planting a bomb in the Colombians's bodyguard car.

• Bodyguard's car damaged too much.

• Find a way into the secure car park.

• Get the bomb fitted.

• Return the car before he returns.

• Get the car from the parking lot.

• Get to Phoenix Autos in Jamaica and get the bomb fitted.

• Go see the guy in the booth.

• Drive into the garage to fit the bomb.

• The bomb has been fitted. Drive carefully!

• Get the car back to the parking lot.

• You got the car back in time. Now get out of here!

Gift Wrapped is a mission in Driver: Parallel Lines.

TK is asked to steal one of the Colombian's bodyguard/escort cars, where he is to plant a bomb in it for preparation for the kidnap attack on Rafael Martinez, the head leader of the gang.

TK then makes his way out of the car park via the ramps inside the building. The security guard, mistakenly believing the car is occupied by the validated bodyguards, allows TK to exit the building. The security the closes the gates. TK drives to Phoenix Autos where the bomb is fitted, before taking the bomb-activated car back. He makes his way back in via the containers or via the entrance, leaving the car back in the same spot, and exiting the building by jumping off using one of the other cars on the rooftop.

After the task has been complete in preparation, the team gather round the planning table in the warehouse. Candy explains in detail how the kidnap is to plan out, explaining that a billboard will be blown up to divert the convoy, then the bomb-active bodyguard escort car will be blown up, before a bridge is destroyed and further a gas station. He demonstrates a 'kill zone', which indicates the limo with Rafael Martinez will be completely vulnerable to attackers, making it easier for TK to gain hold of the limo and kidnap Rafael. Candy goes on to explain the importance of their latest bit of kit - a radio, provided by Bishop (Candy calls it 'a special forces issue'), which they will use to communicate with each other during the kidnap, as well as hear in to the Colombians' plans.

Get the car from the parking lot. [Back to top]

After reaching the rooftop deck, the player must enter the bodyguard car.

Get to Phoenix Autos in Jamaica and get the bomb fitted. [Back to top]

Go see the guy in the booth. [Back to top]

Drive into the garage to fit the bomb. [Back to top]

The bomb has been fitted. Drive carefully! [Back to top]

Get the car back to the parking lot. [Back to top]

When reaching the car park, the player has the choice of either exiting via the entrance, or via the containers once again. The player must not alert the guards on the way in by crashing or shooting a weapon.

You got the car back in time. Now get out of here! [Back to top]

The car on the rooftop.

The bodyguards explaining to each other they're leaving this area.

Get the car from the parking lot.

Heading towards the first ramp on the containers.

Heading towards the second ramp.

On the final container jump.

Heading towards the third ramp.

Jumping onto the parking lot. Note the token star.

The bodyguard's car on the rooftop.

Get to Phoenix Autos in Jamaica and get the bomb fitted.

Driving in the car park.

Phoenix Autos location on the map.

Go see the guy in the booth.

The guy in the booth.

The guy in the booth explaining the job will be done in no time.

Drive into the garage to fit the bomb.

Driving into the garage.

The bomb has been fitted. Drive carefully!

Get the car back to the parking lot.

The parking lot location on the map.

Heading towards the first ramp.

Heading towards the second ramp.

Heading towards the third ramp.

About to park the car on the roof.

You got the car back in time. Now get out of here!

Getting into the car to jump off the building.

Jumping off the roof of the building.

The crew around the planning table.

Billboard exploding, posing as a blockade to slow down the convoy.

Bridge exploding, posing as another blockade.

The mission planned out using toys. Note the black Cerrano. The model indicates that the lack of bodyguards whom are to be killed or diverted by the blockades will mean that Rafael Martinez will be astray and vulnerable, perfect for the team to kidnap him.

Candy explaining the benefits of using the new radio.
Add a photo to this gallery 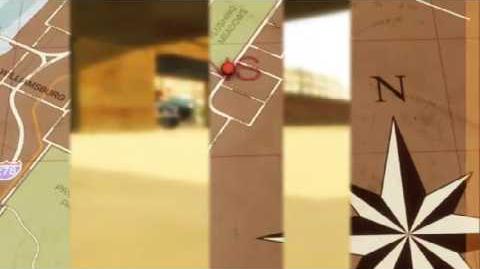 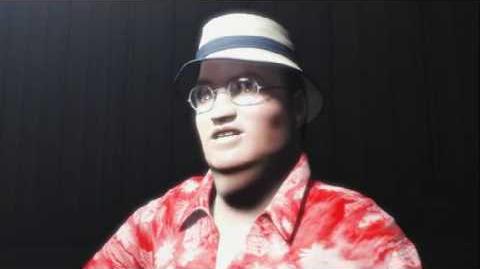 Scene6-DPL-PreKidnap(Video)
Pre-Mission Cutscene.
Add a photo to this gallery

Retrieved from "https://dpl.fandom.com/wiki/Gift_Wrapped?oldid=17505"
Community content is available under CC-BY-SA unless otherwise noted.