The leader of the gang; a totally commanding presence who knows he’s destined for great things. Relaxed, upbeat, super-confident and charming – people just can’t help opening up to Corrigan. He’s got a great smile and you trust him from the word go, but behind the smile is an amoral, ruthless man.

Corrigan is a major antagonist in Driver: Parallel Lines.

Corrigan, sometime before 1978, started working for the City Police as a cop, albeit becoming corrupted in the process, becoming the leader of his own gang featuring Slink, The Mexican, Bishop, Candy and TK. Corrigan thinks out the whole kidnap of Rafael Martinez to discourage the Colombians' cocaine distribution, making sure the gang could make money in the 1980s selling the cocaine. After the gang received the ransom for Martinez, he reveals his true nature and uses TK as a scapegoat and together with the gang escapes with the money.

Corrigan has now become Commissioner of the corrupted City Police, and is having thoughts of running for Mayor. After TK's release from prison, Corrigan closes a deal with Ray: in exchange for money to pay off Ray's debts, Ray would help TK set up assassinations of the gang members, who also form a danger for Corrigan if they had gotten arrested for the extortion operation. After the death of all the gang members, Corrigan is encountered by TK in Ray's home. Ray is killed by Corrigan and he escapes after a brief gunfight. In an attempt to blame Corrigan for Martinez's death and reveal his corruption, TK and Maria steal a cop car with Candy's body in the trunk, which they park into his parking space before blowing up his office with C4 explosives, before delivering his limousine fitted with Slink's body to his mansion, taking out his protection. This caused Corrigan to be placed under witness protection, and although Corrigan benefits from the protection of the entire police department, Maria and TK still manage to track him down. After a chase through New York, he crashes with his helicopter and gets taken away by Maria, who promised TK to let him suffer. By the end of the game, it is unknown if Corrigan was alive or dead, although it can be implied that he has died.

Corrigan is a man of Caucasian descent. He is of a tall and slim build, and has brown hair in a pompadour style with a moustache. He wears a dark brown suit with a white shirt underneath, a red-orange tie, and brown loafers. His outfit is inspired by typical fashion styles of the 1970's.

Twenty-eight years later, Corrigan appears to be much paler and wrinkled than in 1978. His hair has now greyed out, and his facial hair has now been shaved. He wears a navy double-breasted suit, navy suit pants, a pastel blue shirt, a dark blue striped tie, and black wingtips.

As said in his description, he is a relaxed, upbeat, confident and charismatic person. However, behind the smile, he is an amoral, ruthless and manipulative man. He gets angered easily when things don't go his way.

In 2006, he became more aggressive than in 1978. In the final cutscene, Corrigan showed a sign of fear. He wanted TK to shoot him in the head, killing him instantly without pain instead of having to go through torture by Maria.

Corrigan, Slink, The Mexican, Bishop, Candy knew each other and was even the leader of the group before the events of Driver: Parallel Lines as revealed in his introduction cutscene. Not much is known about his history other than he the fact that he is a corrupt police officer. 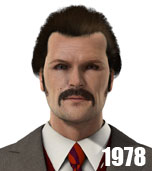 Corrigan in 1978.
Add a photo to this gallery

Retrieved from "https://dpl.fandom.com/wiki/Corrigan_(character)?oldid=17845"
Community content is available under CC-BY-SA unless otherwise noted.