Start a Wiki
Construction Sites are areas under construction around New York in Driver: Parallel Lines.

There are numerous sites across the map, the majority are seen during the 1978 era, and transform into a development in the 2006 era. On construction sites, numerous characteristics are seen shared between each site. This includes Tokens, usually obtainable only with the use of a stunt jump, crafted out of construction materials. Other things in common include the drown wooden fences surrounding the site, green or red barrels, construction fences, Dozer construction vehicles, concrete incomplete structures and cranes.

The construction site in The Bronx.

One of the four towers, which matches the shape of the final building. 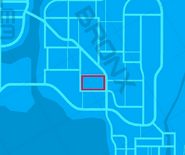 Map location of the Bronx Construction Site.
Add a photo to this gallery

Side view, showing the surrounding area.

Retrieved from "https://dpl.fandom.com/wiki/Construction_Sites?oldid=17268"
Community content is available under CC-BY-SA unless otherwise noted.