The Chrysler Building is a skyscraper featured in Driver: Parallel Lines, it is the 3rd tallest building in the 1978 Era, and the 2nd tallest in the 2006 Era

Just like the Empire State Building, the building is based on an Art-Deco style exterior, and is built out of limestone. The buildings rooftop is a large metal structure, that features several arches, each one getting smaller than the previous, creating a spiral/pyramid effect, the top is then finished off with a 121.ft spire.

The Chrysler Building from a rooftop. 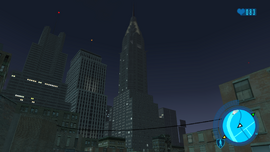 The Chrysler Building at night.

Retrieved from "https://dpl.fandom.com/wiki/Chrysler_Building?oldid=17123"
Community content is available under CC-BY-SA unless otherwise noted.