The Brooklyn in Driver: Parallel Lines.

The Brooklyn is a two door muscle car in Driver Parallel Lines.

The car heavily resembles a 1965 Ford Mustang Coupe, and holds a long and wide look. The front features a basic fascia of 2 plain circular lights, and a simple hood-lip. The wheels are particularly large for a muscle car.

Being a muscle car, it is powered by what sounds like a V8 engine, and it can reach top speeds very quickly, and can survive many crashes with its dense and large frame. 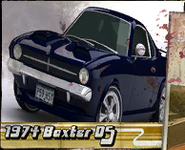 A Brooklyn appearing on a poster in Ray's Autos, 1978, where it is named "Baxter 05".
Add a photo to this gallery

Bodywork 4.
Add a photo to this gallery

Retrieved from "https://dpl.fandom.com/wiki/Brooklyn_(car)?oldid=17759"
Community content is available under CC-BY-SA unless otherwise noted.