• Get Slink's packages before the cops.

• Get the goods back to Slink.

• The cops have called in a helicopter.

• Get the packages back to Slink!

Air Mail is a mission in Driver: Parallel Lines.

After Slink gets in touch with TK telling him about some packages he'd like him to collect, Slink meets TK at a warehouse in New Jersey. He tells him about the deal, and that TK needs to help him acquire some packages being dropped from a helicopter before the police can collect them. The packages are said to be dropped along a course before reaching to a run-down building. The packages are dropped along a course which needs to be followed carefully. Ramps and jumps are laid out and suggested by the route, which sometimes are needed to be used as a boost for time. Once the packages are obtained by TK, the roof of the run-down building is the last location for the packages, and TK is told to get it and get out of there before the police helicopter arrives.

Once TK reaches the top of the run-down building, he flees down the side where remains of a metal platform are found, using it as an escape route, before fleeing the area. A swarm of police cars quickly enter the area just after TK makes it out. TK has to deliver the packages back to the warehouse, where, once arrived, he meets Slink who thanks him.

Get the package. [Back to top]

Hurry, the cops are near the package! [Back to top]

The cops have called in a helicopter. [Back to top]

Get the packages back to Slink! [Back to top]

The chopper on the map.

Hurry, the cops are near the package!

The cops have called in a helicopter.

Ground level of the building.

Getting up to the roof level.

Jumping onto the main roof.

Get the packages back to Slink!

Heading back to the warehouse.

Warehouse location on the map.

Slink taking the packages.
Add a photo to this gallery 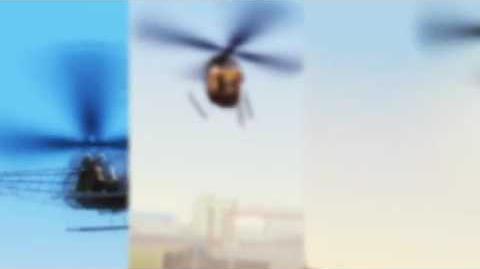 AirMail-DPL-Lowdown(Video)
Lowdown.
Add a photo to this gallery

Retrieved from "https://dpl.fandom.com/wiki/Air_Mail?oldid=16960"
Community content is available under CC-BY-SA unless otherwise noted.